The more flexible Covid measures made it possible to organise a physical autumn edition of Florall.

Once again, a professional jury awarded potentially interesting innovations. After an intensive deliberation phase during which various aspects of the candidates were taken into account, the jury made the decision to award Gold to Callicarpa bodinieri ‘Magical Snowqueen’. Cortaderia ‘Tiny pampa’ got a silver medal and Echinacea ‘SunSeekers Apple green’ received bronze.

This plant is especially suitable for borders. The jury emphasized the good growth, healthy leaves and the ability to branch easily as positive points. Although the flowering is not very spectacular, because the flowers are hidden between the leaves, the plant does offer a beautiful autumn colour. The great ornamental value is manifested after the leaves fall.

The berries continue to decorate the garden throughout the winter. Birds don’t like them, because they taste bitter. New to the Magical Snowqueen is that the berries are completely white, whereas most C. bodinieri's have purple berries. This also gives them opportunities for interior decoration and even to use some winter twigs in the own flower arrangements. 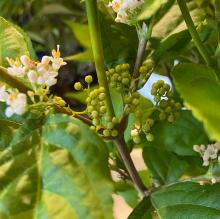 This Cortaderia can be used as a houseplant but she also works well in the garden: from the terrace to the border. It has a very good shrubbery but remains very compact, and is also perfectly hardy. This plant is awarded for the new presentation: Planten Stevens now offers them in a large pot, so that the plant shows more its potential in the trade channels.

The jury was charmed by the decorative foliage and the flowers, which is very attractive even when they are not yet opened. The plant has potential for indoor decoration, but also for the terrace and certainly in the garden. It grows beautifully in clumps, is easy to maintain and can withstand drought.

The SunSeekers group distinguishes itself with a compact habit for Echinacea and with strong thick stems that branch profusely. They have semi-double flowers, where Echinacea usually has only one layer of petals. For example, the green flower somewhat resembles a gerbera. It lends itself well to home use as a cut flower in mixed bouquets. ‘SunSeekers Appele Green’ flowers from July to October. Also noteworthy is the hardiness, which is often a weak point with Echinacea.

The jury was charmed by the beautiful white-green colour, which is somewhat reminiscent of chicory leaves that received a little too much light. The flower bud is already attractive when it has not yet opened. It is a valuable Echinacea, which certainly enriches the range. It can be used on the balcony, the terrace or in the garden and as a cut flower. The sturdy stems and stocky growth are an added value. 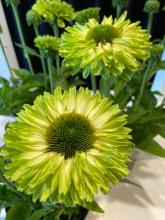 Despite there being no physical fair, the FLORALL awards were organized. Growers and traders had the opportunity to submit novelties and, as with a physical fair, a jury chose the winners.

After an intensive deliberation phase, during which various aspects of the candidates were taken into account and weighed, the jury made the decision to award Gold for Betterbuxus®. Agapanthus 'Poppin Purple’ that was awarded a silver medal also received its first public award. The spectacular colours convinced the jury to award Bronze to Leucothoe 'Rant01' (Firestar).

Betterbuxus hybrids are resistant boxwood varieties against Calonectria on Buxus that were developed together with ILVO by breeding. They also show a higher tolerance to boxblight, according to recent research.

Motivation of the jury:
The jury focuses on the innovating aspect of this plant and thinks that the name Betterbuxus® should help to oppose to the idea according to which Buxus is a difficult plant. Provided that a bit attention is paid to the boxwood tree moth, the resistance against the fungal diseases will put the plants into the position to grow undisturbed during summer.
And this will result in ad added value.
Another aspect appealing to the jury concerned diversity. These plants thrive as a patio plant both in pots and in the garden.

The slightly looser growth habit does not have to represent a disadvantage, since it gives a certain touch of modernity. Furthermore, these plants can be used as soil cover and for pruning. In winter, the plant provides green shades.

This hybrid offers the potential to get international success, even beyond the Flemish market. In this manner, both Flemish research, focussing on horticulture, and the branch itself will have the chance to reach more global attention. 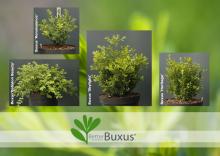 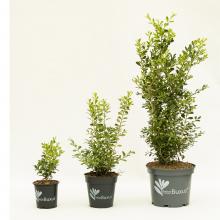 This Agapanthus grows faster than other varieties and becomes approx. 60 cm high and 45 cm wide.
Place 'Poppin Purple' in (full) sun in a well-drained soil.
It is a great plant for the perennial border, in a pot on the patio or balcony or in mixed containers.
Hardy to approx. -12 ºC.

In short: The FIRST deep purple perpetual flowering Agapanthus on the market.

Motivation of the jury:
This colourful plant can address a wide audience. This plant brings colour to the garden and flowers over a long period of time. The ‘Poppin Purple’ plant does not grow too tall. And it is exactly this aspect permitting to plant it both on borders and in a pot.

There are still purple varieties. However, the jury believes that the 'Poppin Purple' will stand out with its colour.

The Agapanthus is a popular long-flowering plant that can profit from other flowers bringing colours to the garden.
The Agapanthus plant attracts butterflies and it also bee-friendly.

“RANT01” has a very compact and dense growth habit. The leaves are bright green and broad white edges appear in the summer. In the autumn, young shoots turn a deep purple/red. They remain like this all winter. The variegation is stable and the plant produces no shoots with green leaves. The plant is also insensitive to leafspot.

Motivation of the jury:
The jury finds that the spectacular colours red, green, and colourful are innovating in comparison with the colours of the other Leucothoe. The different colours result in ad added value in various seasons, and even in winter. This plant grows slowly. This is the reason why it requires little maintenance.

It is a variety adapting to these weird times. At the moment, what we need is freedom, creativity and playfulness. And this plant can bring all this to our terrace.
This plant has the potential to make us happy. 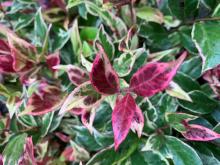 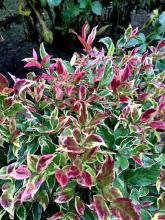